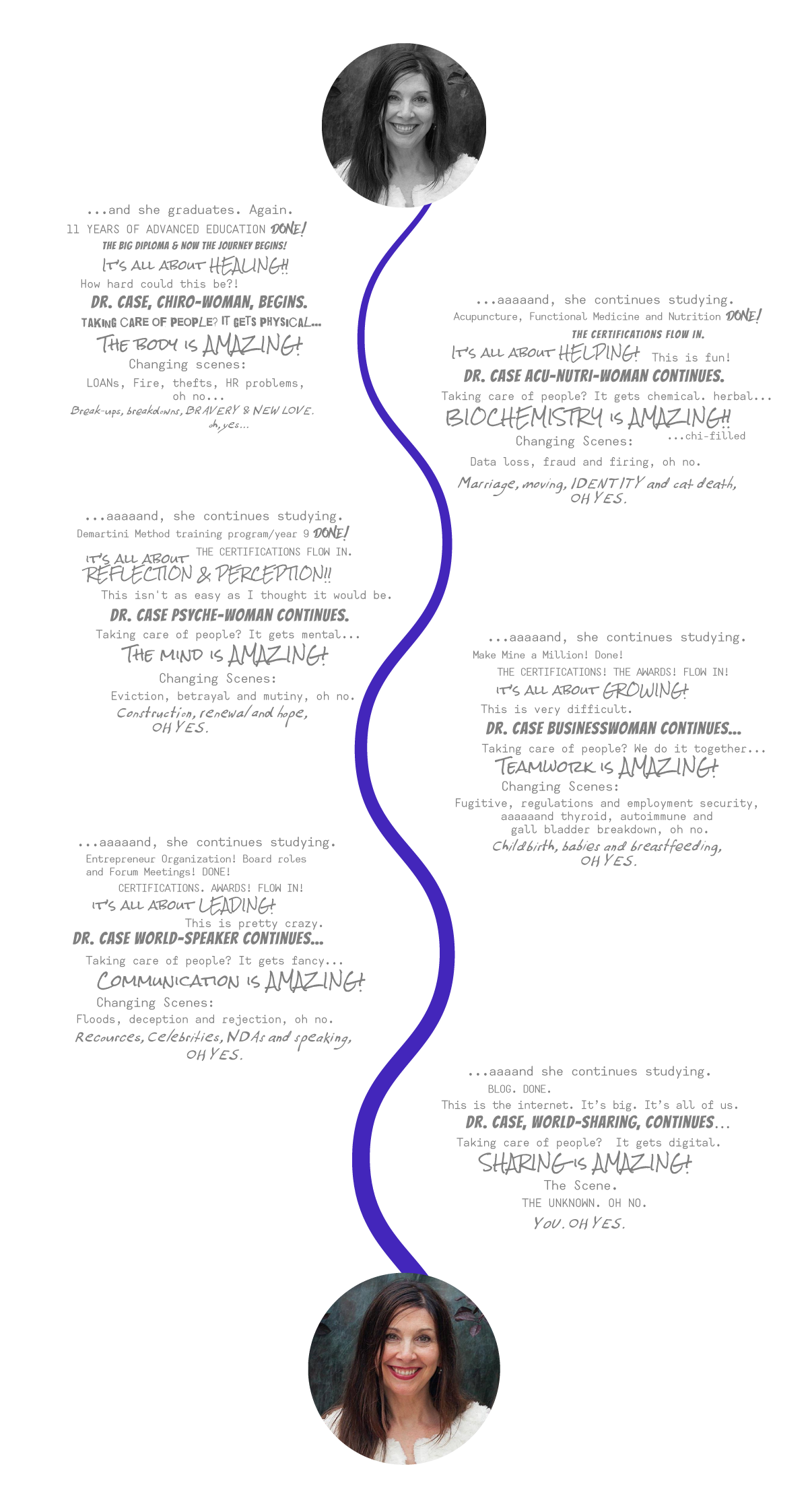 Delivered with extra batteries, she has gotten degreed, accredited, certified and anointed in all kinds of healthcare practices…chiropractic techniques, bodywork, nutritional and functional and traditional (Chinese and Ayurvedic) medicines – and yes, of course she learned clinical massage and craniosacral therapy and is a certified yoga teacher and noteworthy Pilates teacher….and yes, of course she interprets and analyzes the seemingly mysterious data of x-rays, MRIs and bloodwork panels…

Of course she has been the aide de camp to a brilliant neurosurgeon – meaning, most importantly, she has seen the spinal cord and brain stuff up close and personal (live!) in surgeries, surgeries, surgeries, surgeries. So, yeah, she has studied the actual insides of the human head, and, then, once the bee buzzed into her bonnet, she started to seek out details about the inside parts no one can see… Brain. Matter. Mind. Matter.

First stop: Biofeedback! Of course she can increase the body temperature of each finger at a time, slow her breath to a crawl and change her brainwaves with her mind.

Since 1997, she has been a personal coach and professional consultant, mentor and public speaker. Of course she is bound by her NDAs on patients and clients. Of course she can’t talk about them to validate her own little piece of the pie of FAME. Yes, giving wise counsel to the rich and famous is her part-time job. (Read about her impact in these two books – here – where the authors chronicle their journeys.)

Things that have to do with healing and helping others…check, check, check.

You know how you hear that people who love to take care of others at one point needed to be taken of? Well, um, hmmmmm…

Of course she started off as a wee-one with a life-threatening childhood illness. Of course she and her mother lived on food stamps. Of course one day when she was hungry she snacked on a roach. (Indeed, her interest in natural health care started young.)

Of course she did not meet her father until she was 29. (And, no, she did not know she had an older sister. She always thought she was FIRST.) Of course she had sex-dreams about him every night for two weeks. Whaaat? She missed that developmental phase! What do you expect?

Of course she attended way too many schools in her ‘tween and teen years.  Of course she lived in Houston. (Who hasn’t?)

Of course she had an abortion.

Of course she’s used non-traditional communication devices to get her point across when she felt offended: you know, like driving her car into another car when she was being ignored…or pouring steaming hot soup on a customer’s lap after he stuck his hand up her Friendly’s uniform.

Of course she’s been suspended (thrice) from school; and yes, been evicted; had two loans called; survived two IRS audits and was written up for being one of the worst bosses in Chicago. (Youch.)

No, she has not been in jaaaay-alllll. She’s no criminal. What wrong with you, anyway?

Of course she’s been on TV, stages, on expert-panels and hob-nobbing with a Nobel Laureate.

Of course she flew to Canada when she found out she had studied for the wrong exam. Of course she’s Type A. A little high strung.

Of course she started her business alone: She is an entrepreneur. Of course it grew to more than a million dollars a year. Make-Mine-A-Million Member? Check! Of course she won awards and grew more. Of course she became a better boss!

Of course her success did not make it easier. Of course she has been #ME TOO TOO TOO. Of course a banker offered her ..ehem… special conditions under which he would give her a loan. (Of course she is not going to tell you if she accepted his terms. Don’t ask her.) Of course she’s been pushed, prodded, pinned and pulled…a little too close by some patients, colleagues…oh, yeah, and her therapist. Of course she was framed and called names by the guys on the Board. Oh yeah, bullied…by grown-ups.

Of course her education did not keep her safe. Of course she had employees who embezzled, committed fraud, took home staplers, pilfered money, broke contracts and did scummy and unspeakable things. Of course they said she did not do enough for them.

Of course she flew her employees to the Grand Canyon, the Bahamas, and Arizona during the harsh Chicago winters…for staff meetings. Of course it was not a one-time thing! Of course she thought it was team building!

Of course she has had best friends who were…not.

OF course there were years when her mother, sister and brother refused to speak to her. Of course her dearest friend ditched her for Trump.

Of course she has cried her eyes out and sobbed until she choked.

Of course she has met, dined and palled around with chess masters, musicians, billionaires and celebs…from TV to movie to business icons to …well…to Gloria (as in Steinem) and Deepak (as in…Deepak).

Of course she has a husband. A good one. And the best daughters in the world.  Why else would she finally go home?

Of course she fawns over poetry….It makes no sense.

Of course she did natural childbirth and had braces after 40. Water birth? Check. Second degree tear? Check.

Of course she had a successful Kickstarter campaign with a partner and wrote a series of children’s books with her kids. Of course she is still trying to get her grown-up books published.

Renaissance woman? Oh, yeah. Of course. Of COURSE she did Ayahuasca…of course it was by mistake. Of course she doesn’t take any drugs. (None.) Of course she takes emulsified fish oil and digestive enzymes. Of course she is gluten-free.

Of course she gets adjusted, does annual cleanses, panchakarma and a trek to South India.

Of course she has her secrets…What? You think this stuff is private?

OF COURSE HER FAVORITE MOVIES ARE DOCUMENTARIES!

Of course her favorite car is either the bus or a limo…any opportunity to read, study…write…

Of course she has done psychotherapy, hypnosis and past-life regression.

Of course she prays, has a mantra, chants OM and plays singing bowls. Of course she stands on her head to clear it.

Religious journey? That’s easy: It’s been the circumnavigation. Catholic. Check. Judaism? Well, there was the hiatus when Rabbi Jordan said “Just because you don’t like seeing Jesus bleeding on the cross, you aren’t necessarily a Jew.” But apart from that, it was a drive-by Judaism moment. Next stop: Mormon. Yep. Muslim fiance next? Yep. Islam was the way. Next stop: New age mumbo jumbo…psychics and seers…positive thinking and neurolinguistic programming. Check. Check. Check. Then what? OF COURSE she studied Scientology. Then, of course, off to India. Next stop: Hinduism?

Of course she has a statue of the sacred heart of Jesus on the same shelf with Durga.

Of course she has a life-sized YODA near her bed.

Her daughters say she is creepy.

“Stop smiling at people you don’t know!” they insist.

Of course her preferred battle cry is Leave Yesterday Behind!

Having a fresh-perspective is a great thing! A beginner’s mind is where it’s at…

That’s why there is sparkle in her eye! A skip in her step! That’s why she looooves to be alive!!

One life. It’s a privilege. Every day is NEW! And it is happening NOW.

There are so many possibilities! Life is full of experiences…FULL OF POSSIBILITIES!

Yesterday is gone.  Tomorrow is too far away.  No two days are the same!

Of course it pisses her off when anyone boils perfectly predictable emotions responding to an eventful life down into one convenient label. Say, for example, one like high-functioning ANXIETY.